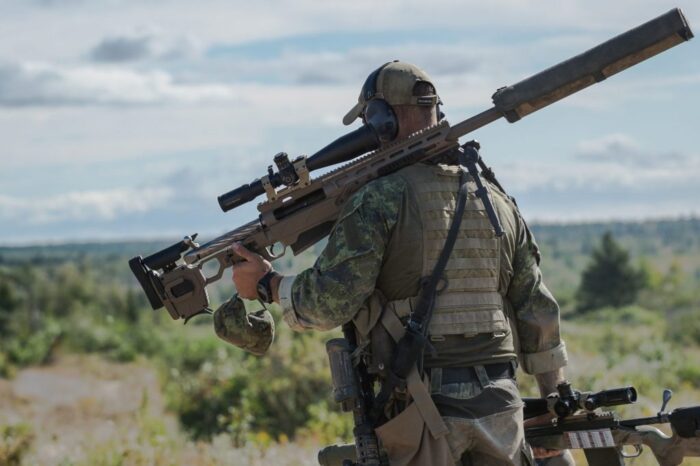 Rifles are becoming popular for their versatility and accuracy. They are also powerful and that is why they are used by the military and hunters alike. And the United States has been home to some of the most powerful firearms for a long time and still is, given that the firearm sales continue to grow annually. As a matter of fact, over 2.6 million rifles were manufactured in 2018, rendering them the second most popular firearms in the country.

But that begs the question – what ARE some of the most powerful hunting rifles in the world? How are they different? Let’s take a look!

What Makes a Rifle Powerful?

The power of a gun depends on the momentum it imparts to bullets. Simply put, the momentum of a bullet is a result of multiplying its mass and the accrued velocity. Therefore, to cause significant destruction, the bullet should either weigh more or released at a high speed. You can also make a light bullet lethal by firing it at a high speed. The weapon power, aka muzzle energy, is typically defined in ‘joules’ and the more a bullet carries a lot of energy, the more we can consider a firearm highly lethal. For instance, a typical 9x19mm has about 500 to 520J while a minute .22LR caliber has an energy of about 160J.

Additionally, cartridges possess varying power depending on the weapon type. Like the .22 LR cartridge on pistols has a 55 to 90J power while on a rifle it has up to 259J.

Most Powerful Rifles Available on the Market

Starting the list is the famous Accuracy International (AI) AX50 which is very popular amongst military snipers precisely in long-range targets. The AX50 tends to be a highly sought after gun. It inherited the AW50’s effortless maintenance, toughness and reliability. Featuring a 26-pound behemoth which is anti-material and 27’’ free-floating barrel makes it unmatched. Also, it possesses five-round separable steel box magazines.

You can fold the stock to its left to shorten the length. Its manufacturers also interpolated a 27’’ stainless steel grade barrel with 1:15 twist, making it a high powered hunting rifle. The duo 4mm hex screws were purposeful to thread its muzzle brake onto a barrel as well as indexing to its barrel. It is this muzzle brake that absorbs lots of kick after the rifle recoiling, making it one of the most powerful hunting rifles.

Barrett M107A1 is a high powered hunting rifle that is easily accessible without any issues. Its designation facilitated the creation of novel weapon categories. Courtesy of its impressive durability, reliability as well as amicable firepower, it has become a very popular firearm whereby over 50 countries sell it worldwide.

Apart from that, this gun efficiently revolutionized the sniping field via adapting high caliber bullets. Gun enthusiasts sometimes call it the Light Fifty because it possesses manageable recoil and also has a lightweight rifle bipod. You cannot go wrong with Tennessee’s official rifle.

As one of the best alternatives with similar options and firepower, we recommend you to take a look at the BARRETT 82A1 with the same .50 BMG caliber:

McMillan TAC-50 is amongst the most powerful rifles in the world – reliable but simple. You can use it in the military and even for hunting. The base weapon features a grandly designated receiver and fiberglass stock that you can adjust, enabling it to perform its job effortlessly. They also manage the hefty recoil of the gun.

Although it has an officially short firing range, McMillan TAC-50 made the three most extended shots out of five making it an excellent choice for hunters alike. It is amongst the high powered rifles in the USA.

Winding up the list is the powerful and strongest rifle. The CheyTac futuristic weapon boldly boasts as the furthest and most effective range compared to other sniper rifles. This is at a wondrous 2734 yards! Factually it has a worldwide reputation of hitting three bullets within 16.26 inches from each other. The target was about 2322 yards away, yet it performed astoundingly accurate.

Its designated system is sophisticated considering its look and the patented McArthur PGRS-1 muzzle as well as free-floated barrel which reduce the recoil drastically. Featuring a retractable and collapsible buttstock, firing this rifle becomes comfortable and renders the gun easily storable and portable.

What Is the Most Powerful AR Rifle?

The Big Horn Armory AR500 is currently the world’s most powerful AR rifle. It is available to law enforcement, big bore aficionados, and hunters. Based on DPMS AR .308 rifle style, it was designated and manufactured in the USA where it proved to be a powerful rifle. Moreover, thanks to the nitrite finished steel parts, the rifle is corrosion-resistant. This AR rifle not only has excellent grip but also a comfortable finger rest when firing.

Choosing the most powerful rifle can be daunting, with a plethora of options available. Nonetheless, some of the options mentioned above have been used by soldiers targeting distant ranges when fighting military combatants or demolishing sensitive equipment with success. But, you can also use them for personal outdoor excursions.