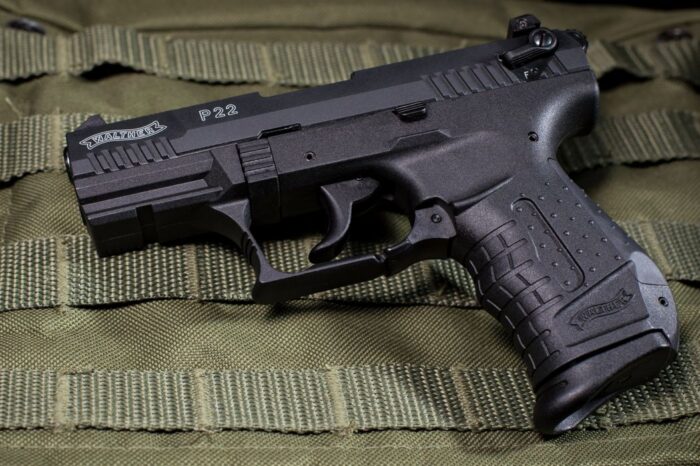 Are you attracted by the idea of going to the shooting range?  Nowadays, a lot of people think that it can be useful to know how to shoot, mainly for the purposes of self-defense. But then there is a question of what is a good gun to use for training, especially when you are a complete beginner. We are here to come to your rescue by creating this Walther P22 review.

As we received a lot of questions about this issue, we realized that it is an invitation for us to do some research. We talked with policemen and others who have experience and knowledge about the topic, and their answer was surprisingly unanimous –  they all said that the people who want to learn how to shoot should begin with P22 Walther. It is a tactical pistol, which means that it is very reliable and accurate. As such, it can be useful for those who are looking for a self defense gun, collectors, and people who have to protect themselves at work.

However, if you know absolutely nothing about pistols, when you hear about a P22 gun doesn’t mean a lot! No worries! We hope that it will provide you with enough information to be able to decide whether or not this gun corresponds to your particular needs.

Walter P22 is a semi-automatic pistol that uses .22LR rimfire ammunition. It is manufactured by Carl Walther GmbH Sportwaffen and it first appeared on the market in 2002. The official distributor for the US is Smith & Wesson Corp.  This pistol is made as a rimfire version of the well known and popular Walther P99 centerfire pistol.

Nowadays, this pistol became one of the most popular semi-automatic pistols out there. It is especially popular amongst beginners and informal shooters who like to use it for plinking – shooting in an informal setting and at improvised targets such as empty cans, soda bottles, etc.

Many people pay attention to how the gun fits when they hold it for the first time they take it, and for this, nearly everybody says that it immediately feels fantastic. The P22 can operate both as single and double action. A single-action fires at approximately 4 pounds, while a double action uses about 11 pounds of force.  Users like it also because it comes with two interchangeable barrels – the length of one is 3.4 inches and the other 5 inches. The latter comes with a weight compensator that is installed on the barrel. These two barrels can be interchanged, and you can get both in a “combo” package. 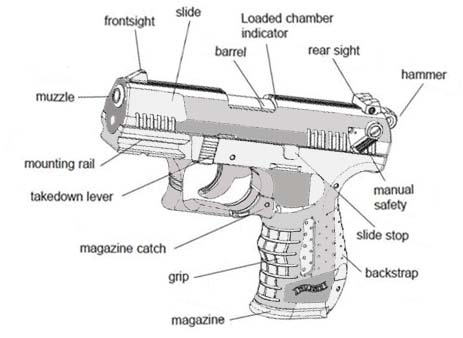 The main difference between P99 and Walther P22 pistol is that the latter has an external hammer. The manufacturer used polymer for the frame and zinc alloy for the slide. Other elements, such as barrel, recoil, etc., are made of steel. In the table that follows, you will find the principal Walther P22 specs.

The length of the barrel on this gun is 3.4 inches. It is made of steel as well as other elements such as recoil, ejector, and extractor. This gun is pretty short and lightweight, but if you want a longer version, it is possible to get an extended barrel. By doing it, you will improve Walther P22 reliability. This pistol also has suppressors that play a role in decreasing the noise.

Okay, so this gun has a sliding spring so, we could assume that magazine release is easy. However, there is a problem despite it. The thing is that the ejector is pretty stiff so, you have to click hard to activate the magazine once it is in the pistol. Now some people say that this gets better over time. They also say that it works much better when people use a middle finger instead of a thumb. Others think that you may see improvement after cleaning it with the best gun cleaning solvent.

Walther P22 comes with a chamber viewpoint that serves to indicate that it is loaded.  Some states impose this as mandatory, and thus a lot of gun manufacturers make sure to include it in their products. However, while it shows that there is a round in the chamber, you can’t rely solely on this indicator when you want to know if it is empty.

This gun is equipped with two sights – rear and front. The front sight is interchangeable; therefore, you can adjust elevation. There are three dots on Walther P22 polymer sight, and that provoked the resentment of some users. The main reason is not so much that there are three dots but more that they are not illuminated, but white on black instead. However, some experts say that this makes aiming more discrete, and this can be useful in some situations. Besides the standard, it is also possible to buy additional sights for this pistol.

Same as any other firearm, P22 Walther has safety features. It has three crucial safety mechanisms:

All these safeties work with a trigger in a forward position.

Looking at Walther P22 pistol reviews, you will notice that it comes with an external slide stop. After the user empties the magazine, the external slide stop locks. Bear in mind that you shouldn’t use it as a release slide because it will speed up the erosion of other parts.

As we already mentioned, this pistol comes with a single and double action trigger system.  Some people think that it is useless as most find it simpler to learn how to operate with a gun that has only a single action system. Moreover, they say that SA is enough. Indeed, learning how to use double-action is more challenging but far from impossible. You should look for a skilled shooting instructor and be patient and prepared to work hard.

This little pistol features an accessory rail that is found on lights and lasers.  The rail manufacturer used is Piccantiny that is used for military firearms. It is designed to replace iron sights that were used before.

Somewhere at the beginning, we mentioned that this pistol feels fantastic from the first moment you hold it.  The main reason why this gun is so popular is that you can easily control it regardless of how small is your hand. Additionally, its shape is also comfortable. Keep in mind that you shouldn’t buy a gun that feels heavy. The fact that this pistol comes with an ergonomic handle, as well as that it is so lightweight and small-caliber, this gun is an excellent option for women who want to have a good weapon for self-defense.

In the past, only pistols made for cops and soldiers had this feature. Now Walther P22 has it as well, and this is another thing why it is so popular, according to Walther P22 QD reviews.  The main advantage of this feature is that it allows for a change of grip insert to fit everyone.

It is a lightweight and little gun suitable for beginners who only want to practice shooting. It is also an excellent option for everyone who wants to have a self-defense weapon, especially women. And in the end, it is also a fantastic service pistol. We hope that you enjoyed these Walther P22 2022 reviews  and that it will help you make the best decision.